Often times, the focus on mythology makes it difficult to see the mathematical and scientific significance of the winter solstice because it leads to the assumption that there is only the myth and nothing else. This however is not how our ancestors viewed the phenomena around them. Instead, they made amazing mathematical and scientific calculations/observations and the myth was the explanation of those calculations/observations. It takes nothing away from them that they utilized mythology (the myth as an explanation for the phenomena is by definition a hypothesis) however many scholars have done exactly that, making claims like “the Aztecs made sacrifices to make sure the sun rose” or “the Aztecs were terrified their world would end with earthquakes.” Analyzing Mexica/Azteca mythology and corresponding mathematical and scientific evidence in regards to the Winter Solstice reveals the mythology is only one part of the story.

Probably the oldest myth regarding the birth of the sun (in Tenochtitlan at the time of the conquest) during the winter solstice is that of Teuccizcatl and Nanahuatl. The myth takes place at the end of the fourth sun. In order for Tonatiuh to rise into the fifth sun at Teotihuacan there had to be a substantial sacrifice. Teuccizcatl hesitated to jump into the fire and Nanahuatl took the opportunity to jump instead transfiguring himself into Tonatiuh himself. Teuccizcatl jumped in afterwards but due to his initial hesitation, became the moon. The myth continues that although Tonatiuh rose, he did not move for a few days until Ehecatl-Quetzalcoatl blew him into motion. Although many scholars take this myth at face value and assume there is nothing else to the story, there are rich layers of math and science held within.

According to Nasa, if observing the sun from Earth during the Winter Solstice, it appears to stay still for three days due to its location in relation to the Earth. Clearly our ancestors noticed this anomaly and included it in their fifth sun myth when Ehecatl-Quetzalcoatl blew the Nanahuatl-Tonatiuh sun into motion. This is a scientific observation that can only come from horizon-based astronomy. The connection between fire and the heat of the sun is also prominently featured in the myth. This connection may seem obvious but this concept of tonalli, or heat, is the very foundation of our indigenous world-view. These scientific observations still just scratch the surface.

Teteoh (what scholars refer to as “gods”) were assigned birth names in the same way people were based on their tonalli. Tonatiuh’s birth name is Nahui-Ollin which translates to four movement. This connects directly to the myth where it describes a still sun that then begins to move. This birth name also refers to one of the days in the 260-day tonalpohualli. Just as in the myth, every 4-Ollin was met with many offerings before the conquest in Tenochtitlan in reverence of Tonatiuh. Fortunately for us, Tontaiuh’s birthday can be tracked to a specific time and it reveals even more regarding our ancestor’s understanding of science and math. 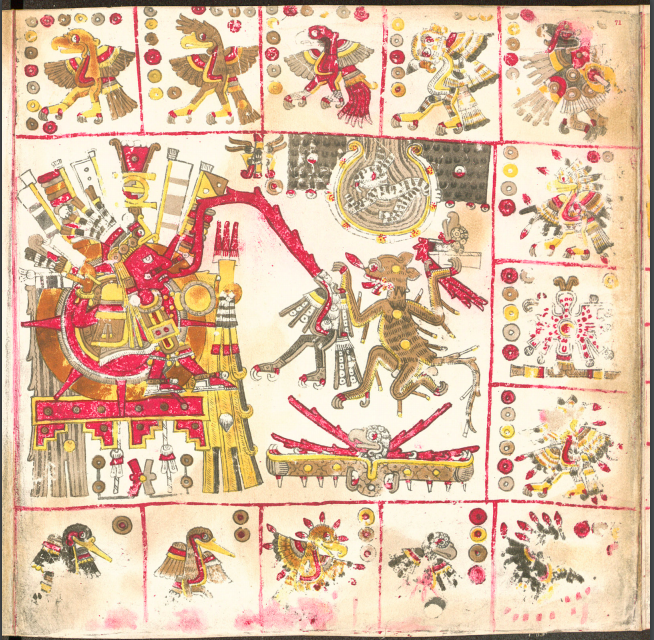 On page 71 of the Codex Borgia an image of Tonatiuh can be found. This page depicts birds for each day numeral 1-13. This was likely used by the tonalpoque to assign birds to the tonallis of the people who consulted them. The middle of the page however contains very important information: it literally depicts the birth of Tonatiuh. We know this because his birthday, 4-Ollin can be seen below him. The moon can also be seen in the background perhaps as a reference to Teuccizcatl. A bird is also being offered to Tonatiuh. Alone, the presence of 4-Ollin with an image of Tonatiuh wouldn’t be significant however, the year sign of 1-Acatl can also be found above Tonatiuh. 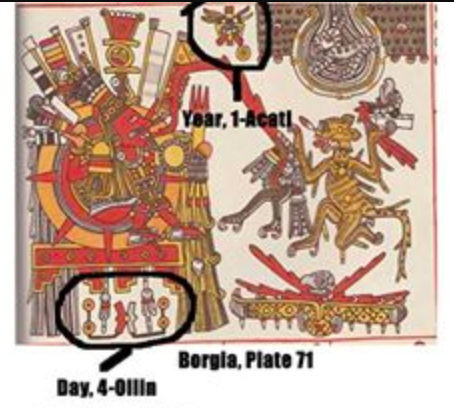 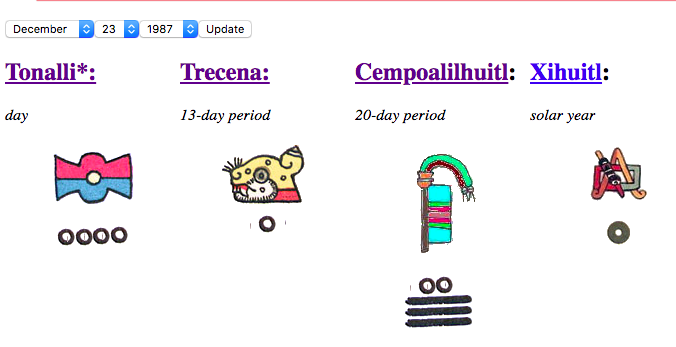 This page thus firmly places the birth of Tonatiuh on the day after the Winter solstice. Scientifically, this makes sense because the winter solstice represents the shortest day of the year or the day that the sun is at its weakest (because the Earth is located the furthest it can be in relation to the sun). Our ancestors thus literally saw the winter solstice as the time our sun dies and the day after as the rebirth of our sun. Although this would intuitively be a good place to start a new year, the fact that the sun does not appear to move for three days around the time of the winter solstice would make it difficult to know precisely when to start the new year, hence our ancestors’ decision to begin the new year a day after the spring equinox (when this phenomenon does not occur).

Lastly, a very fascinating algebraic mathematical relationship can be found when analyzing this page further. 2019 happens to be a 7-acatl year. This year, the winter solstice will be visible in Mexico on December 22nd.

The day after the winter solstice, December 23rd corresponds to the day 10-Ollin this year.

Mathematically, this is significant because if we subtract the numerals from the year 1-acatl and day sign 4-ollin, we get the number 3. Thus in order to predict the numeral that accompanies days ollin in acatl years, one can use the following algebra equation:

The winter solstice is important to many indigenous cultures around the world and for the Mexica/Azteca, it was a time filled with deep cultural, scientific, and mathematical meaning. We should strive to discover all of the layers of meaning in the surviving myths that we have and understand the mathematical and scientific connections that are inevitably hidden within.

To learn more about how the Fifth Sun myth can be found in Pre-Columbian codices, click on the image below:

Previous Post: The Codex Borgia: A Pre-Columbian Guide for Calibrating the Azteca/Mexica Calendar
Next Post: The Tianquiztli Constellation