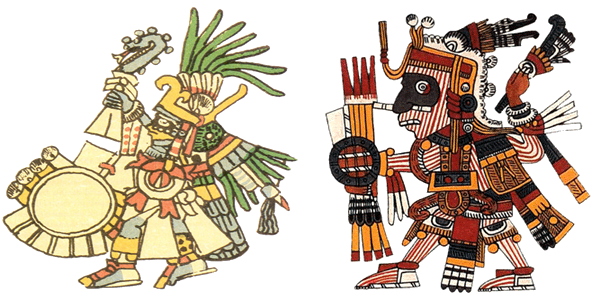 “One Flint Knife set in. On this One Flint Knife, when it tarried for a day, they then made offerings to Uitzilopochtli, whose day sign it was, and to Camaxtli, god of the Uexotzinca. Thus it is said they made offerings and paid great honor [to Uitzilopochtli] there at his temple, in his tribal district, at the place whose name was Tlacatecco. There was his image guarded, and all his array. They had it all spread out before him and laid in the sun; they offered incense and presented him what were called the quetzal feather cape, the blue cotinga feather cape, the red spoonbill feather cape, the yellow parrot feather cape, and the hummingbird feather cape. But only after them came last the no longer very precious feathers, like the white heron feather cape or the reed thrush feather cape. Severally they laid all of them down, offered them separately, arranged them in rows, placed them in order, etc. And all these precious capes, when they spread them out remained there a day. By doing this, it was said, they sunned them for Uitzilopochtli. And there offerings were made; there they laid out all the gifts, called fast foods. And all the good, prepared foods came forth from the palace; and from the houses in the commoner’s localities they [also] emerged and came forth. But only for a little while it was, remained, and rested there. Then the old men of the calpulli [of Uitzilopochtli] removed, continued to take an transport, divided, and distributed, what pertained to them. They removed it to a number of places. They consumed all. No one remained alone. Everyone came to it: the devout of the place, those who had fasted for a year; those who had danced and fasted for Uitzilopochtli. And Moctezuma then offered all manner of precious flowers [before the image] — varied flowers which were sweet-smelling and fragrant: magnolia, maize flowers, cacao flowers, popcorn flowers, and garlands of maize ears, which grew everywhere; basket flowers, raven flowers; yellow and blue tobacco flowers; milky corn silk flowers; and all manner of precious flowers, prepared,—well-formed, well-arranged, made as shields of flowers, circular, radiating, and spreading; and the pleasant-smelling ones. It seemed as if the fragrance, the perfume, spread and blanketed his temple. And so they burned [tubes of] tobacco — only in bundles. First they bound them about the middle. As they burned them, they filled [the area] before [the image]. It was as if the smoke arose, spread a cloud, extended, came to settle, and lay billowing. Likewise it was said at the time of the day sign One Flint Knife, that the wine-makers showed special concern. At that time they cut and bored their maguey plants so they showed special concern in order that their maguey plants would flow much and produce well. And so they offered gifts in the temple of Uitzilopochtli. There they offered their wine, which had been newly brewed, called ‘uitztli’ they went pouring it into bowls on which rested sucking tubes. And the ones who there partook of it were the already aged, called quanueuetque, who already had the privilege of drinking wine. These drank; they continued drinking with the sucking tubes.” – Florentine Codex, Book 4, Pages 77-79